Why Is One Company Paying $213,000 a Day for a Basic Safety Violation? 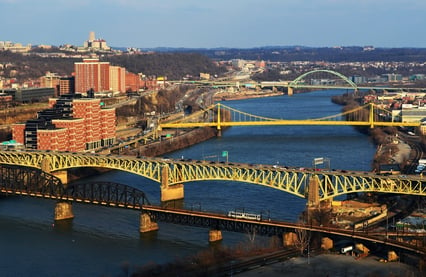 Could your company currently afford to pay over $213,000 in fines per DAY, plus hundreds of thousands of dollars in repair costs, for a basic safety violation? Well, that’s exactly what is happening right now to Joseph B. Fay Co., a contractor based near Pittsburgh, PA. For those of us who live and work here in the greater Pittsburgh area (our hometown here at Select International), this story is very relevant to us because we are still living with the effects of having a major bridge out of service.

On Friday, September 2nd, the Liberty Bridge, which crosses the Monongahela River and provides a major connection for drivers between downtown and the South Hills, was shut down due to a dangerous fire that damaged a 30-foot long beam supporting the structure of the 90-year old bridge.

Employees from the aforementioned contractor were reportedly using a blowtorch to cut steel as part of a rehabilitation project when torch sparks suddenly set fire to plastic pipes and a large tarp. The fire quickly gained intensity and grew so hot (over 1,200 degrees Fahrenheit) that it began to actually melt the steel support beam. Luckily, city firefighters were quickly on the scene and controlled the fire within 30 minutes.

It was not a moment too soon either. According to PennDOT (Pennsylvania Department of Transportation) officials, the bridge was actually just “minutes away” from collapsing, which would have been catastrophic given that there were still cars crossing the bridge when the fire began.

OSHA officials are currently investigating the incident, which has led to prolonged traffic delays and the need for various alternative routes for the approximate 55,000 drivers who use the bridge daily. In addition to the $213,600 per day in PennDOT fines that the contractor must pay for the bridge being out of service, they will also be held responsible for paying all repair costs. Due to the fact that this repair project is so unique, these repair costs will likely be extensive. In fact, a special team of design and engineering experts from around the country had to be brought in to fix the bridge since there is no other past example anywhere of a fire damaging a critical weight-bearing chord on a bridge of this size. Click here if you want to read more detail on this incident.

While the investigation is still under way, and there could be multiple factors that led to this fire, one thing is clear – it sure seems like it could have been prevented. Whenever hot work (e.g., steel, cutting, welding) is being performed, there are various precautions and processes that should be put in place in order to prevent a fire from igniting and spreading. This should include removing potentially flammable materials from the area or creating a barrier between the ignition source and such materials. Investigators stated that fires while conducting bridge repair work are quite rare, which also tells us that this should never have occurred.

So what are some precursors that might have contributed to this potentially catastrophic fire? Safety incidents of this nature are always complex, and there may not be one true “root cause” but let’s look at this through the lens of the SafetyDNA model.

Familiar to many of our frequent readers, the four factors of SafetyDNA are as follows:

SafetyDNA, along with leadership style and leader behaviors, is also a key component of the safety leadership profile of leaders overseeing any hazardous work. This model can be very helpful as a way to better understand behaviors and decisions that individuals undertake in at-risk situations.

Let's break down the four factors of SafetyDNA as they pertain to this incident:

I'll begin with the Control factor. This psychological trait is all about how well you can control your emotions during stressful times, as well as the extent to which you feel that you are in control of outcomes, such as your personal safety. It’s hard to know what state of mind these contractor employees were in, or whether they had become frustrated or agitated prior to the start of the fire.

Individuals who score lower on this factor tend to easily get frustrated, which distracts them from working safely. They also tend to attribute their safety to luck or circumstance and have the mindset that “Accidents are going to happen – you can’t prevent every injury.” As a result, they tend to take a less proactive approach to reducing exposure to risk, and research shows they are injured significantly more often than individuals who are higher on Control.

If conditions on the bridge that day grew stressful due to any equipment failures or schedule delays, and the person doing the metal cutting was a low control individual, this could certainly have contributed to careless or distracted behavior.

Were the employees who were conducting the hot work aware of the sparks that were descending upon the tarp? Were they even aware of the tarp and the piping in close proximity? One wonders whether there was a designated fire watch present at the time.

Regardless, it’s hard to avoid a hazard if you are not actually aware visually or situationally of objects or conditions around you. Research shows some individuals show significantly lower levels of awareness, attention to detail, and working memory than others during situations that demand high levels of concentration and focus. I would think that cutting steel atop a major city bridge may take just a bit of focus. If the employee never saw the potential hazards of this situation, it would have been hard for him/her to prevent the ignition.

If you work for a safety-conscious company where hot work such as welding or metal cutting is frequent, you probably have at least some hot work-related safety policies and procedures. Did this company have such safety policies, such as a fire watch requirement? Was a risk assessment required prior to starting work, or was there a basic policy requiring the removal or shielding of any flammable materials?

The investigation will reveal this soon, but my guess is “yes.” And if they find that employees did, in fact, violate existing safety policies, this factor becomes very important. Numerous psychological research studies have found that some individuals are much more likely to adhere to rules than others, and individuals in the population vary widely on this factor.

Our research has found time and time again that employees who score lower on this SafetyDNA factor tend to be involved in significantly more safety incidents (usually due to safety violations) than those who score high on this factor.

Some people call it risk tolerance, others call it risk perception, but it boils down to a person’s general comfort level with risk. Some people have a high threshold for risky situations, while others are constantly trying to avoid any possible risk or danger. The Exhibits Caution factor includes this comfort level with risk along with impulsivity (do I think before I act?), and together, these two traits are highly predictive of at-risk behavior, safety violations, and workplace injuries. It is possible that this contractor did not have many safety policies in place regarding hot work.

Or perhaps this particular task was considered “non-routine” for these employees and no specific policies were violated, which means that it was up to the employee to assess the potential danger level in the moment and decide whether it was safe enough to cut metal around plastic piping and tarps without proper precautions. Under these conditions - which indicate poor safety leadership on the part of management – employees who score low on the Exhibits Caution factor are particularly at risk because they tend to underestimate the dangers and can have a sense of invincibility and/or complacency.

It goes without saying that a significant portion of the blame for this incident can probably be attributed to leadership at this company, from supervisors all the way to the top. Leaders create and drive the safety culture through the things they say, the things they do and how they do those things. What they deem acceptable is what employees will ultimately deem to be acceptable.

We all make mistakes, and until we know the details from the investigation, it is hard to say what leadership’s role was in this incident. But from field research as well as our experience working with hundreds of companies in the industrial sector, it is clear that strong safety leaders “walk the talk” when it comes to safety and they reinforce safe behavior while showing a genuine concern for their people. If the leaders in charge at this contracting company were not consistently engaging in these behaviors, it probably led employees to feel comfortable bypassing hot work safety policies or be complacent about potential fire hazard risks.

Ultimately we may not learn all of these details; we will have to rely on what the OSHA investigation reveals. But by looking at incidents through the lens of the 4 factors of SafetyDNA as part of the root cause analysis process, valuable information can be learned about safety behaviors and their psychological precursors. This is not to be used as a way to assign blame, but rather as a way to learn about our tendencies and prevent employee harm in the future.

While external circumstances such as equipment, engineering, and management systems certainly contributed to this event, it is important to remember that not all individuals react the same way across situations, and not all individuals see or interpret risk the same way. It is important to take these individual differences into account when training employees on safe work practices, when giving them behavioral feedback, and assigning tasks. By doing this, we can take account for both the external and the internal (i.e., SafetyDNA) factors that place employees at risk each and every day.