The traditional, unstructured job interview is just plain useless. I'm not saying this to be provocative. Every day on social media, I see some version of this: "The 1 interview question this CEO asks to identify top performers." Then I meet people, often nurses, who tell me they only need to review a resume and spend 5-10 minutes with a candidate and they're able to determine whether the candidate will be a good nurse; they don't need silly structured interviewing or any other data. 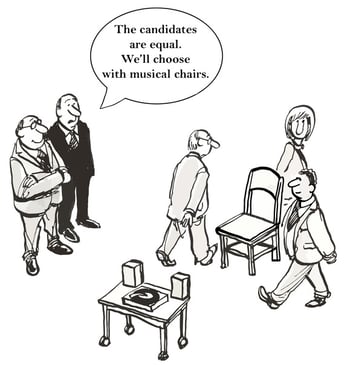 Most of our clients combine a structured, behavior-based interview with a healthcare-specific pre-employment behavioral assessment, along with other components to create a comprehensive selection system. Data from these consistently show they are quite good at identifying the best candidate. Even when presented with this data, though, some people would still prefer to rely almost exclusively on their gut instinct from the interview — even when they admit they've often been proven wrong! Honestly, the worst offenders are intelligent, highly educated people who understand data and science — senior leaders, physicians, and nurses.

A recent New York Times article summarizes fascinating research supporting the idea that the traditional interview is utterly useless, and worse, can actually impede your ability to pick better candidates. The author, Jason Dana, is an assistant professor of management and marketing at the Yale School of Management. He cites a 1979 example where the University of Texas Medical School wanted to quickly increase its incoming class size, so they admitted 50 students who had reached - but failed - the interview stage of the process. These students ended up doing just as well as their classmates who passed the interview in terms of attrition, academic performance, clinical performance, and honors earned. The judgment of interviewers, in other words, added nothing to the admissions decision.

Dana's own research actually "shows that the problem with interviews is worse than irrelevance: They can be harmful, undercutting the impact of other, more valuable information about interviewees." They had subjects try to predict students' GPA for the upcoming semester based on an interview, the students' course schedules, and past GPA (they were told that past GPA was historically the BEST predictor of future grades). They also looked at a group of students without meeting them in person.

The result? Their predictions were far more accurate for students they did NOT meet where they were forced to rely on more predictive data. The interviews had been counterproductive. Dana noted, "The key psychological insight here is that people have no trouble turning any information into a coherent narrative."

Worse yet, when the experiment results were presented to the next group of subjects, they STILL rated highly, the importance of an in-person interview. Dana's conclusion: People tend to have an unwarranted faith in their ability to glean valuable information from a face-to-face conversation — even in the face of hard evidence that it's not true. The data show that an unstructured interview adds NOTHING to the decision-making process and may even hinder it.

Dana rightfully notes that one solution is to structure interviews so that all candidates receive the same questions, a procedure that has been shown to make interviews more reliable and modestly more predictive of job success. He notes that "Realistically, unstructured interviews aren't going away anytime soon. Until then, we should be humble about the likelihood that our impressions will provide a reliable guide to a candidate's future performance." Interesting, to say the least.

Even board members of large companies unduly believe in their own ability to evaluate senior leader candidates based on face-to-face unstructured interviews. The qualities that boards respond well to in candidate interviews do NOT correlate with the attributes that actually predict senior leader success. Again, even when presented with this data, they STILL will place great importance on the face-to-face impression.

What can we learn from all of this?

1. We need to continue to show people the data that their instinct is NOT reliable.

2. We need to add as much objectivity as possible to the process — we've been promoting the idea of an evidence-based approach to hiring, and nurses seem to get that concept.

3. We need to build a comprehensive, deliberate, efficient selection process at all levels; that gives us the best chance of making the right decision while still creating a positive candidate experience.

4. Finally, we need to realize that EVERY hiring decision has an impact on our ability to fulfill the mission and act accordingly — getting hiring managers to understand their important role in building their teams.

Learn more about the concept of Evidence-Based Hiring with our whitepaper on the topic: