Gender Bias Creates a Double Bind for Women in Leadership

Welcome to the third installment of this blog series on gender and leadership. In the first two blogs we learned that: 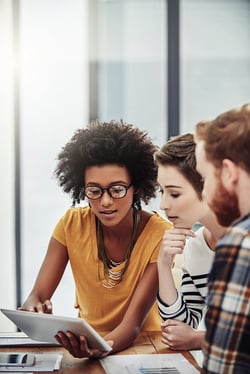 So, if women are beneficial to an organization and equally as effective in leadership roles, why aren’t there more women leaders? There are several suggested explanations for the gender gap in leadership. We will discuss the most popular theories in this blog series; today we are going to start with bias - both explicit and implicit.

Explicit bias refers to attitudes and beliefs about a person or group on a conscious level. So, in this case, explicit bias is blatant discrimination in the workplace based on gender. Many of us would like to think that, in this day and age, explicit gender bias is no longer happening. However, there are around 30,000 sex discrimination cases filed every year for behaviors related to explicit bias. These cases can vary from using gender as deciding factor in the hiring process (when it’s not a bona fide occupational qualification), to unequal pay, to sexual harassment. Explicit bias makes it easy to see how mistreatment can directly affect the upward trajectory of a female employee. A woman experiencing explicit bias could easily be passed over for promotion due to her gender or for rebuffing the advances of a powerful colleague (e.g., leader). In sum, while likely much improved from decades ago, there are still many unfriendly work environments for women that limit their ability to take on leadership roles.

Earlier this week, Starbucks closed its stores and offered racial bias training to its employees. This action was in response to an incident between white employees and black customers that ended with police involvement. Why are we talking about race in a blog about gender bias? Because the training they received was implicit bias training, and it is relevant to gender as well as race (and many other situations). How women are treated at work is highly linked to implicit biases held by stakeholders in the organization.

In psychological terms, implicit means unconscious. Bias is an inclination, favorable or unfavorable, toward a person or group often based on stereotypes, attitudes, and beliefs. Guess what? Everyone has them. Yes, I am saying that you (and I) have unconscious biases that drive our behavior. Because we are human beings with limited cognitive capacity, our brains have learned to create short cuts and make predictions about people and situations. This is where societal norms and life experiences contribute to our implicit beliefs. When we observe a behavior or experience a situation, we filter what we see through these beliefs and then draw conclusions and interpretations. Implicit bias training is becoming more prevalent because negative stereotypes related to a particular group (e.g., race and gender) can lead people to make inaccurate evaluations of particular situations, which can lead to discriminatory behavior. If you’d like to learn more about implicit bias, you can take the Implicit Association Test (IAT).

It is particularly important to understand implicit bias when investigating women and leadership in the workplace. Research has shown that when individuals are asked to describe a leader, the qualities listed are typically agentic characteristics such as assertiveness, achievement orientation, independence, and rationality. These traits are considered masculine and are part of a traditional male gender role. Women are expected to be more communal in their behavior by being considerate, collaborative, and emotionally sensitive. Because of this, one researcher called his theory “Think Manager-Think Male” (Schein, 1973). Other researchers have followed suit with other theories related to the incongruity of women and traditional leadership characteristics (see Heilman’s Lack of Fit theory and Eagly and Karau’s Role Congruity Theory). In general, these theories propose that traditional gender roles for women do not fit the image of a leader that many individuals have in their heads. So, when considering a woman for a leadership role, she just doesn’t seem to “fit.”

Based on this research, you’d think that if women were to demonstrate more agentic characteristics and start to “act” more like a traditional leader, they would be more accepted in the role. Unfortunately, that isn’t always the case; there is a phenomenon called the “double bind.” Women who demonstrate agentic leadership behaviors are penalized for acting against the traditional female gender role. As such, it often leads to agentic female leaders being unliked and unpopular. For women in the workplace with a desire to gain influence through leadership, this feels like a Catch 22. If she acts like a leader, she will be disliked. If she acts like a woman, she won’t be seen as a leader.

There are several ways to address this problem. One way is to follow in the steps of Starbucks and offer implicit bias training. Implicit bias training raises awareness and helps individuals to understand that their thoughts and beliefs may be inaccurate. Implicit biases can be overridden through careful thought and purposeful changes to the underlying stereotypes and norms that contribute to behavior. Along those same lines, changing the image of what a traditional leader is can reduce incongruity for women. Putting more women in leadership roles will make it less likely for people to see women as in-congruent with leadership. In order to make leadership roles more attractive to women, organizations may need to create safe spaces, redefine roles, improve family leave policies, and groom more women for leadership roles when identifying high potentials.

Don’t fret – just because we are all biased doesn’t mean we are destined to make discriminatory decisions. When it comes to women and leadership, not all is lost. Be aware of these issues and work to change the nature of leadership in your organization to be more inclusive.