The Bright Truth about Personality Tests and Good Science

“Dad, did you know that the work that you do is used to destroy people's lives, make them unemployable, and create disunity in our society?”

This was the question my high-school-aged daughter asked me in response to a trailer for an upcoming HBO Max series, Persona. As anyone can imagine, that is a shocking question to hear from your child.

Upon viewing the trailer myself, I recoiled even further.

I am a scientist who has dedicated my career to using tools like personality inventories to help people develop their potential and find jobs that best fit them. In this trailer, I saw lies, misunderstanding, and fearmongering obscure a field of scientific inquiry that has benefitted millions of people while disadvantaging no groups — all for the purposes of profit and sensationalized storytelling. Perhaps the show itself will have a more accurate depiction of personality testing than the dramatic and misleading trailer did, but either way, the trailer accomplished its goal — I, for one, will be watching the show the second it airs.

You see, I have developed and use many rigorously researched assessment tools designed specifically to reduce and/or eliminate bias based on non-job-related factors, such as gender, race, or membership in any group. My team of thought-leading researchers work daily on tools that include several personality assessments used to benefit millions of people and organizations, for many purposes around the world.

Industrial/Organizational and Occupational Psychologists have been developing and applying personality assessments for more than a half a century. We have learned through rigorous research how to create solutions that make organizations more fair, more inclusive, and give everyone applying for positions the best chance of getting a job based on their actual merits, rather than any surface-level or non-job related bias. In fact, I consider it core to the responsibility I have to my science and the people who take my assessments to always provide measurement that is used responsibly and allows for inferences about people that are fair, accurate, and based on job-related behaviors.

As I watched the trailer (several times), it struck me that the directors may not understand personality testing particularly well, based on the content they included in the trailer. After all, they are not scientists who have dedicated their careers to researching how to measure job-related behaviors fairly and accurately. Even if they don’t understand personality tests for what they are meant to be, the producers’ goal is to secure viewership, and only sensationalism seems to do that these days.

So either way, I wanted to provide the people at HBO Max with some facts about personality testing that perhaps were missed when doing the research and development for their show content:

Perhaps the most alarming content in the trailer was the notion that the use of personality tests harms groups of people based on ethnicity, gender, age, and other non-job-related considerations. As an I/O Psychologist, I was disheartened to hear this claim. The science that I am so very proud of has had diversity, equity, and inclusion (DEI) as a core principle for more than the nearly 30 years I have been active.

Long before organizations were taking DEI as seriously as they are today, psychologists have been working hard to eliminate bias from organizational decision making. Personality tests have played a huge role in our efforts to make the world of work a fairer and more inclusive place. Sixty years ago, in the United States, employment decisions were made based on many non-job-related factors — sometimes overtly, sometimes based on implicit bias — but often unfair. I/O Psychologists have fought hard to create alternatives to these unfair practices and personality tests have played a major role here. 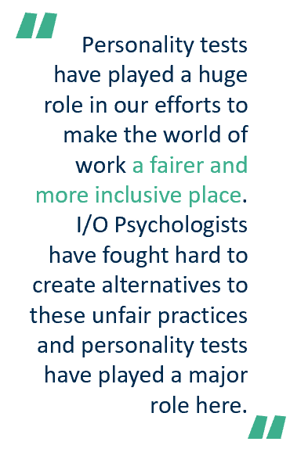 You see, when someone takes a personality assessment online, the scoring algorithm has no idea if the person identifies as any particular gender or is a member of any particular ethnic group. The only thing that scoring algorithm knows is what the job candidate said, as it relates to some job-related construct (e.g., attention to detail). It is hard, if not impossible, to make unfair decisions about people when using a well-designed personality assessment correctly. In fact, this is why personality tests are so often favored. Compared to many other types of selection procedures, personality inventories show the smallest group differences between protected groups.

If this show were successful in convincing employers to stop using personality tests in hiring, eventually, organizations would be less diverse and less inclusive places. It would be a step in exactly the wrong direction related to diversity and inclusion than I suspect any of us would want to take.

2) Not All Personality Tests are the Same

The trailer focuses on one particular tool, the Myers-Briggs Type Indicator (MBTI). I have a lot of respect for this assessment. It has been around for a long time and it has received a lot of research support. However, practically every psychologist who has ever done personality research, including those who continue to work on the MBTI, will tell you, it should not be used for employee selection.

It is good for purposes such as team building and coaching, but it isn’t a selection tool designed for making decisions between job candidates. If a company or organization were to use the MBTI during their hiring process, it would be an unsupported misuse of the tool. The organizations we work with trust us when we advise not to use this specific tool for selection decisions.

Job Selection Assessments Measure Personality on a Continuum, NOT as a Type

A measure of personality traits does not describe someone as “this” or “that.” Rather, it measures where along a continuum someone falls for a given trait. This type of measure is much more useful for understanding how a person tends to approach work tasks relative to others.

Thousands (literally) of empirical research studies have shown that these types of assessments are useful in making decisions about people that are accurate, fair, and job-related. In fact, they have withstood legal challenges in courtrooms around the world because there just is no evidence that they lead to biased decision making based on any non-job-related consideration.

There are, of course, poorly developed personality inventories and the typical pop-culture personality tests you might find in Redbook or Buzzfeed. These are in a different class. They are non-scientific and should only be used for fun. No serious organization would ever use these for making decisions about people, and no serious person would ever use this type of tool for personal development. If the trailer suggested that the type of personality assessments developed by non-scientists (such as the one the same daughter I mentioned earlier took, which provided insights into which of our three cats she is most like), are being used for serious purposes, I would agree that this is a problem. However, what the trailer implied is that many of the rigorously developed, scientifically credible, responsibly used, personality tools are somehow harmful...which is simply not true.

The trailer would have us believe that there is some magic within personality assessments. They comment about how these tests are delving deeply into clinical conditions, implying that they are medical tests that are inappropriate for use in non-medical settings. To be sure, there are clinical measures of personality, but again, these would be inappropriate and illegal to use for 99% of employment scenarios.

The reality is that personality testing used for typical organizational and development purposes is really not particularly complicated. I am a psychologist, not a magician revealing the secret behind the magic trick, here. Personality assessments are pretty simple.

To understand this, think about what a personality trait really is. A trait is just a common behavior pattern that is consistent across time, setting, and situations. The theory behind using a personality assessment is that if we can measure how a person typically behaves in certain situations, they may behave that way in the workplace, too.

So, when the participant in the trailer comments, "It [the test] knew exactly who I was,” there was not magic at play; it wasn’t the result of big tech privacy invasions. Rather, the test results are just based on what the participant said they typically do. The fine scientists who work on the MBTI ask good questions in their tool that elicit responses that help describe behavior patterns to the questionnaire takers so that the participant can provide meaningful responses. Nothing magical or particularly controversial.

So, back to the trailer. In the end, I am fascinated to watch the show. I think I may have to watch it through my fingers with my hands clenched over my face like I might a fictitious and gratuitous slasher film, but I certainly think it will be engaging TV.

I welcome the creators of the HBO show to read this and come talk to us if they want to learn more about personality testing. And, if you are reading this without much understanding of personality testing — maybe you saw that trailer and found it interesting too. Remember, most of the best Hollywood productions that we see on HBO are fiction. It’s looking like much of this show may be the same. Let’s wait and see.

Hopefully, you do find it intriguing and you want to learn more about personality testing and all of the appropriate and fair ways to use it in organizations. If so, PSI has over 100 psychologists and psychometricians who are equally as passionate about the topic as I am. I am sure that all of us would love nothing more than to bend your ear about all of the positive outcomes you can see from a well-developed and scientifically credible personality assessment.

Have thoughts, questions, or ideas about personality assessments? Want to chat about the show? Shoot us an email at social@psionline.com. We'd love to hear from you! 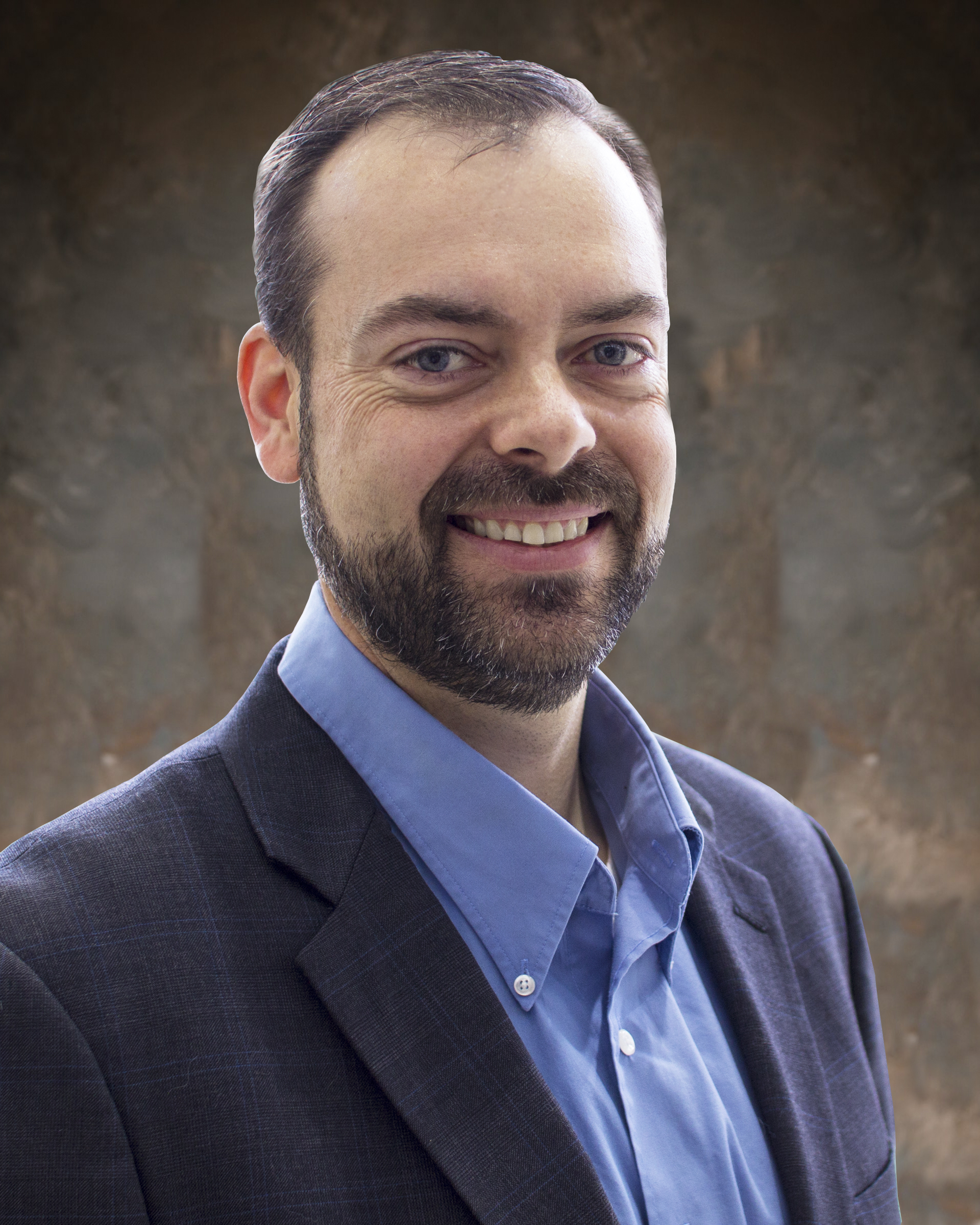 Ted Kinney, PhD is the VP of Research and Development for PSI. An Industrial/Organizational psychologist, Dr. Kinney leads a team of selection experts and developers in the creation and on-going research into the most efficient and effective selection methodologies and tools. He is a trusted advisor to many international companies across all industries. He has particular expertise in behavioral interviewing, turnover reduction, effective selection strategy, and executive assessment.