The Role of Adaptability in New Technology Adoption in Healthcare

Does the traditional hospital, medical, and nursing culture stifle change?

It’s the age of smart phones and artificial intelligence. Data and technology are changing our world at an amazing pace. For those in healthcare, the pace of change probably feels difficult to manage, but, in reality, healthcare’s pace of technology adoption lags far behind other industries. 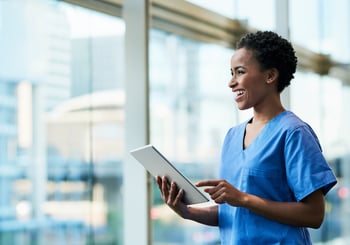 A recent Ernst and Young global survey shows that only 55% of US doctors report using clinical decision support software, and 39% use patient portals. 62% see value in virtual communication technologies but few plan to adopt them.

EHR use in the US has historically lagged far behind countries like Norway, the Netherlands, the United Kingdom, New Zealand, and Australia. EHR adoption has increased rapidly in recent years but many health systems still have substantial parts of their business using paper and, yes, fax machines. In some cases, new technology being introduced to healthcare has been used in other sectors for years.

In 1990, I was in a meeting of the Orthopedic surgeons at a reasonably progressive hospital. The surgeons were presented with data showing that the national average length of stay following total hip replacement surgery was seven days. (Yes, we are now moving to doing these procedures on an outpatient basis!). This hospital’s average stay was ten days. In other industries, this team might start a discussion about the data, outcomes measures, differences in the type of surgical procedures, or nature of post-op care – trying to understand the differences and see if there was something they could learn or do differently/better. That was NOT what happened. The immediate reaction was one of defensiveness and an assumption that a seven-day post-op stay simply could NOT be in the patients’ best interests! There was a lot of yelling, eye-rolling, and table pounding.

It's not always this bad, but hospital, medical, and to some degree, nursing culture is often one of skepticism and tradition. I may have heard “but this is how we’ve always done it” as an excuse to avoid change, more in healthcare than in any other industry. Similarly, both nursing and medical training encourage healthy skepticism. Evaluate the data, be critical until you see that the data and science really support the idea and will improve patient outcomes. This is healthy. Sometimes, though, it can become a slightly “unhealthy” skepticism that stifles meaningful dialogue and adoption of positive change – when the initial reaction to ANY proposed change is “that won’t work here.”

This all probably sounds familiar to those who’ve worked in hospitals.

In a recent blog, we proposed that “adaptability” may be THE most important behavioral trait for providers, today. Certainly, those who are naturally adaptable are going to experience less stress and burnout in response to the pace of change. Hopefully, those who are naturally more adaptable will be more open to new ideas -to evaluating them objectively. In addition to adaptability, it would be ideal if providers are innovative – not only responding well to changes imposed on them, but taking the initiative to seek new, better approaches.

Healthcare is unique – in that the service being provided is critically important and we can’t take the Mark Zuckerburg approach of “move fast and break things.” At the same time, though, the demands of the system require constant innovation and change. The systems by which we evaluate and implement new technologies need to adapt. Perhaps more importantly, for the people on the front lines – physicians, nurses, and even support staff – adaptability is going to be more important than ever – even critical, for survival – the patients’ and the providers’.