5 Gold Medal Talent Strategies of the US Women's Gymnastics Team 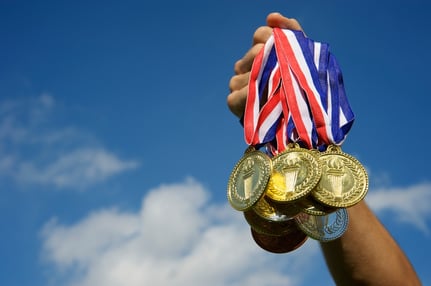 This week millions of little girls are doing handstands and cartwheels in their living rooms as they cheer for Simone, Gabby, Aly, Laurie and Madison. Once again, the USA women’s team breezed their way to team gold in Rio. For many Americans, the highlights of the 2012 Olympic Games included watching the USA women’s gymnastics team dominate the competition. And the domination continues. Since 2012, American teams have tallied three additional world championships. In fact, the last time the American women were beaten on the world stage was in 2010.

Whether or not you enjoy, or even understand gymnastics, we can learn valuable lessons from any organization which has achieved this level of excellence. Martha Karolyi, the national team coordinator, has been credited with a keen eye for talent and meticulous attention to detail. There is no doubt her leadership has contributed greatly to the team’s success. However, there are many years of effort leading up to the selection of each national team. The talent strategy created by the USA Gymnastics association makes the team’s successes possible.

1) Create a pipeline for talent

USA Gymnastics promotes awareness of the sport on the national stage. The organization also plays a significant role at the grassroots level, providing guidance and training for hundreds of gyms who want to offer quality gymnastics instruction. As a result, there are more than 90,000 athletes currently registered in the competitive program.

This large pipeline of talent provides the opportunity to identify large numbers of highly talented individuals. Talent in this pool is so deep, some have surmised that if the US were permitted to field two teams at the Olympics, we would take home both gold and silver. The USA Gymnastic association does not rely on chance alone to generate potential talent for each year’s winning team. The 2028 Olympic team members may be recruited today at a gym near you.

What are some ways you can create a talent-rich environment for your recruiting efforts?

USA Gymnastics created the Talent Opportunity Program (TOPs) as a standardized educational and talent search system for young gymnasts. Girls ages seven through ten are evaluated for specific physical abilities at annual state testing events. Those who qualify can compete for spots on a national team. Team members, along with their coaches, are invited to attend development camps with some of the best coaches in the world.

Participating in TOPs is not required to reach the highest levels in the sport, but the skills and abilities measured in the TOPs program have proven to be reliable predictors of a young athlete’s potential. Even athletes who do not participate in state or national testing can gain much from the foundational training and conditioning portion of the program.

Have you identified the competencies required for success in all areas within your organization? Do you have a strategy for developing these competencies across a broad population while identifying those who possess exceptional talent?

3) Clarify and communicate the mission

USA Gymnastics’ Junior Olympic competitive program includes a series of ten levels. The rules regarding safe progression through competitive levels are understood by every coach in the system. A certain level of mastery is required at each point before a gymnast can progress. This approach ensures each gymnast obtains a solid foundation, allowing them to progress toward their personal maximum potential.

As changes are made in the international gymnastics system, the US programs are modified in response. Coaches in any USAG-affiliated gym have access to information regarding the skills and level of execution required to be successful at each level, including the Olympic level.

Do your employees know what is expected of them in their current role? Do they fully understand what will be required in order to progress?

4) Consider both performance and potential

Scores from any gymnastics competition are readily available to anyone with an internet connection. It would be possible to choose Olympic Team members based on scores alone. However, Martha Karolyi understands the limitations of considering only performance when evaluating talent. Various circumstances, including illness, injury, coaching changes, and subjective metrics can all effect a performance score. This is why she invests significant time and energy into fully understanding an athlete’s potential.

How are you investing in measures of employee potential?

When the time came to select the five members of Team USA, Martha carefully considered the mission of the team: Capture as many medals as possible. In order to achieve this goal, she needed gymnasts who were strong in every event, and therefore likely to post high scores for the coveted team and individual all-around competition.

However, to be competitive in individual events, the team needed gymnasts who were exceptional in each of the four apparatus. If Martha had simply chosen the five “best” gymnasts, the team would potentially miss the opportunity to win medals in each event. Instead, she identified a skills gap on the uneven bars and rounded out the team with a specialist. This addition solidified the team gold and increases the odds of collecting more medals in the individual competitions.

Do your executive teams have “gaps” in strategic competencies which may be limiting your organization’s success?

As we cheer for Martha’s “Final Five” in the remaining 2016 Olympic Games, I hope you have a new appreciation for what it took to prepare and assemble such a dominant team. The USA Women’s Gymnastic Program has mastered the art of talent development. Applying some of their proven strategies in your own organization is sure to have gold medal-worthy results.