Can You Measure and Develop Executive Presence?

A client, one of the largest health systems in the country, has identified executive presence as a critical hiring and development focus.  The senior team is unanimous that the trait is vital for success.  They are not alone.  Even in the world of technology, a survey of CIOs conducted by Gartner put executive presence second on the list of the top 20 leadership traits. By comparison, technology skills ranked 12th.  Another survey found that senior leaders think executive presence accounts for 26% of promotion decisions (Center for Talent Innovation, 2012).

What is Executive Presence?

I’m reminded of the phrase from a famous Supreme Court case – where you may not be able to define something but you “know it when you see it.” This is true of executive presence. 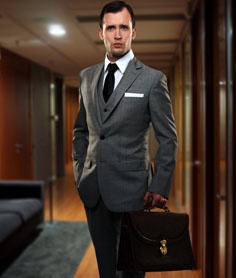 Even experienced executives struggle to define it.

There was a time when it probably had a lot to do with being a tall man with the right clothes, posture, a firm handshake, and alpha male personality.  (Think Don Draper from Mad Men). Fortunately, we’ve evolved from that limited view.

Successful executives come in all shapes and sizes, and they all can display executive presence.  This still doesn’t tell us WHAT it is, though. I like this summary from a 2012 Harvard Business Review article “Deconstructing Executive Presence.”

[I]t ultimately boils down to your ability to project mature self-confidence, a sense that you can take control of difficult, unpredictable situations; make tough decisions in a timely way and hold your own with other talented and strong-willed members of the executive team.

Some would say it has something to do with gravitas – conveying a sense of seriousness or intelligence – but that seems like a pretty narrow definition, doesn’t it?

Our team wrote an interesting paper on the topic and considered executive presence as a combination of three dimensions:  Style, Substance, and Character.

Can You Measure It?

This is a tough question.  You can find a few “executive presence indices” out there, but I think you almost have to look at a more subjective rating.  When we talk about measuring leadership performance and potential, we’ll measure intrinsic attributes like personality traits, past performance data, and “perception” data – i.e. how the person is perceived by peers, colleagues, subordinates, and leaders.  I tend to think that executive presence, by definition, needs to fall in the perception category.  The only real measure of whether you display it is whether you are perceived as having it!

Related: How to Use the 3 P's to Predict Manager and Leader Success

Now, that doesn’t mean that certain components of executive presence can’t, indeed, be measured.  It’s somewhat like the way we look at emotional intelligence.  EQ is a “super construct” made up of sub-components including empathy, communication skills, and social and self-awareness.  Each of these can be measured. They all contribute to global EQ.

OK, so what attributes make up executive presence?  There is no definitive list but I think this one is a good place to start:

Can It be Developed?

The answer is a qualified yes.  You have to start with a level of self-awareness and adaptability.  You have to be observant and have trusted advisers who are willing to give you unvarnished feedback. Then, you need to be willing to adapt and improve. Hopefully, some examples from my own experiences will illustrate how this can work:

This last point gets at something important.  There is no single approach to developing executive presence.  There may be common threads, but each executive must find his or her voice and approach based on strengths and weaknesses.