A Lesson from WWII – Finding your Ike.

I’m a bit of a history buff and was recently listening to an interview of an author of a book about U.S. Military Generals from WWII until today. One story resonated with me as we think about building a leadership team to face the battle of Healthcare Reform.

In the years before WWII senior promotions in the military were based, largely, on tenure and rank. The next person “in line” advanced to leadership positions when the time came. George Marshall, Army Chief of Staff, realized that, going into World War II, he needed not the next person in line, but the best person – not only that but the best person for very specific positions.

For instance, he realized that he needed a strong collaborator to coordinate the efforts of the allies in Europe and reached down into the ranks to quickly promote a relatively unknown Dwight D. Eisenhower, up to eventually serve as Supreme Commander of the Allies. Ike’s performance proved that Marshall was an astute evaluator of talent. Marshall also saw that General Patton had many faults but pursuing an enemy across a continent was a particular strength that would be needed so he kept him around for that task. 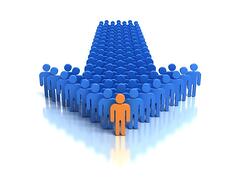 More importantly, though, Marshall brought a new approach to building a leadership team:
1. Reward success
2. Punish failure (he did not hesitate to remove an ineffective leader)
3. Find new people by looking down into the ranks to identify the talents he needed

Let’s not equate today’s healthcare challenges to a World War, but just as WWII brought new challenges that required a new approach to leadership -- traditional approaches in healthcare hiring to building leadership strength need to change.

For a few decades, margins in healthcare were strong and no one was really looking at outcomes. We could tolerate less than ideal leadership at some positions, and could survive a sloppy approach to identifying and developing talent. We could leave it to chance and shake off poor decisions. That’s no longer the case.

What we need to do:
1. Define success (it’s about outcomes and the bottom line – not just maintaining the status quo).
2. Reward success by developing top performers and giving them new challenges.
3. Have the conviction to move those who don’t perform or fit your vision or culture – too much is at stake.
4. Commit time and resources to a system of identifying and developing leaders.

The military has a very deliberate and detailed system of “fit-reports” and officer training and development opportunities. Those who want to shine, have the opportunity to do so. Those who perform get better fit reports, and their superiors tell THEIR superiors to move that person up in the ranks.

Executive selection and development is more important than ever before, the cost of leadership failure can often mean the success or failure of an entire organization. To learn more about executive development, download our whitepaper.