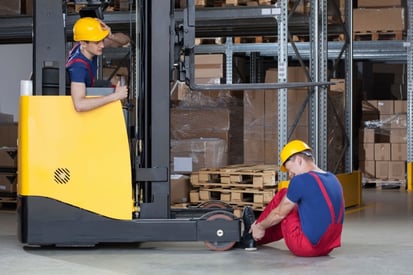 In a recent blog post, I described an experience at a food and clothing bank where I volunteer in which I nearly had my leg cut open by a forklift. I hoped that I wouldn’t see any more blog content during my time there, but sadly another incident (two incidents, in fact) has already occurred that highlights an important workplace health and safety topic.

A 22-year old employee at the bank recently completed forklift certification and has been eager to gain experience behind the wheel. Thus far, he had done a good job at safely operating the vehicle by following all of the techniques he learned in training and advice we’ve given him. However, just 10 minutes into my warehouse shift yesterday I was guiding him as he moved a double-stacked pallet of clothing onto a truck when suddenly the top pallet began to shift and lean. I immediately called for him to drop the load so that he could readjust and stabilize the stack, but he panicked in his reaction and pulled the wrong lever, which instead moved the forks horizontally and further imbalanced the weight. Thankfully I had plenty of time to get out of the way as the pallets, easily weighing several hundred pounds each, came crashing down.

Warehouse management and I attributed the fall simply to an inexperienced operator making mental errors; using it as a learning experience, we discussed what went wrong and why, explaining to him the importance of staying calm and being careful while working with heavy loads. Thus, we cleaned up the mess and moved on with our day. However, just an hour later the same employee was lifting a hydraulic forklift jack into a truck, when the jack suddenly fell off of the forks onto another employee’s foot, breaking several bones. Because most of the weight in these jacks is lopsided around the hydraulic component, lifting them requires proper fork alignment to support the distributed the weight or they will fall right off, which the employee failed to do.

After the ambulance left with the other employee, I asked the forklift operator if he was okay, mostly to inquire about his mental state after these incidents. He told me that he felt bad about what happened, but then went on to say that he probably shouldn’t drive the forklift anymore for a couple days because he had the flu and thought that might have impacted his work performance (paraphrasing). This took me aback, I had not even noticed that he was sick, but I realized why when he revealed that he was hiding his illness because he needed the paid hours and didn’t want to be sent home.

When we think about employees coming to work sick, our initial reaction tends to concern the spread of germs which could get others sick and result in greater lost work time. However, being sick at work can clearly yield other ramifications. We all know what the symptoms of a cold or flu feel like, and that they can severely impair our cognitive processing, motor skills, reaction times, and alertness, among other things, which is often compounded when we take medications that can make us drowsy and further impact our behaviors.

Now think about the critical requirements most workers need to successfully and safely perform their jobs, and why being sick could easily lead to an incident. Looking back at the S.A.F.E. model of SafetyDNA, employees who come to work sick are surely less aware of their surroundings and exhibiting less caution than they normally would, not because they are intentionally doing so but rather because the illness is limiting them from performing at full capacity. Employees who already have inherently lower levels of Awareness may be particularly at risk when trying to work through the symptoms of a cold, the flu, or other illnesses. These symptoms will simply amplify many common blind spots that they already have, such as forgetfulness, low attention to detail, or being easily distracted.

Particularly for jobs with higher levels of inherent dangers, managers and safety leaders must stay on high alert to notice when employees attempt to work while sick, and try to find less hazardous alternative tasks for them to perform if they are allowed to stay on the job site for their shifts. While many workers cannot afford to lose valuable hours, we must also be highly conscious of the potential risk involved not only to them but to all of their co-workers, when illness impacts their ability to work safely.