Emotional Intelligence - A Conversation with a Physician Leader 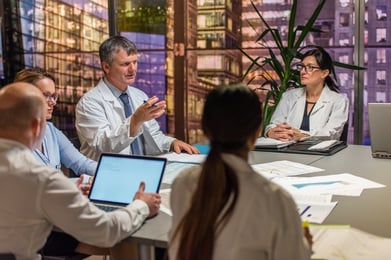 Emotional Intelligence (EQ) is a hot topic in healthcare today and for good reason. It’s particularly important for physicians as they move into leadership roles. Unfortunately, discussions about EQ are often too vague to be of much practical use.

What is Emotional Intelligence?

There are lots of definitions, but I like this one from Daniel Goleman, Working with Emotional Intelligence:

“The capacity for recognizing our own feelings and those of others, for motivating  ourselves, for managing emotions well in ourselves and in our relationships.”

Psychologists refer to it as “meta” construct. It’s not a single attribute, but a cluster, including self-awareness, self-regulation, social awareness, motivation, empathy, and social skills. Accordingly, measuring just the broad category of “emotional intelligence” may have limited value. You must understand the underlying attributes that make up EQ.

Here’s a simple example: A nurse may be quite high in empathy. He or she cares about the patient. But if that same nurse is low in social awareness, they may fail to pick up on the needs of the patient or family for support, comfort, or medical explanations to put them at ease. Or, if they lack social skills, they may not effectively communicate the support needed.

EQ in healthcare is unique. General measures of EQ may not be sufficient. The behavioral competencies in question are being tested in specific and unique circumstances. For instance, our data shows that when measuring compassion (typically important in an EQ assessment), there may be an ideal compassion range for a healthcare provider, because a person too high in compassion can be dysfunctional in some patient care settings. Similarly, whereas conscientiousness may not be emphasized in some EQ measures, it could play a role in some healthcare EQ settings. It's also interesting to note that physicians often score low on EQ. It’s not their fault - individuals are not chosen for medical school because of high levels of EQ. It has not traditionally been required for success in medical school or as a clinician.

Why Do We Care About EQ?

First, because it impacts patients. A Press-Ganey survey of over 2 million patients showed they place a high priority on the degree to which providers meet their emotional needs. Today, the ability to remain calm under pressure, to resolve conflicts, to learn from mistakes, and have a thoughtful discussion on tough issues, are prerequisites for success.

Second, because it impacts organizational effectiveness. EQ plays a big role in whether multi-disciplinary teams will succeed in solving complex problems.

Can It Be Improved?

If you assess for EQ as an innate personality trait, your score is not going to change over time, even with training. Personality traits are generally stable. I score low in Attention to Detail and always will. But, after understanding my assessed personality traits, I have been able to develop certain work habits that allow me to perform adequately at certain tasks that require a level of attention to detail. I’ll never, however, outperform colleagues who score really high in this attribute because they are innately better at it. The same thing applies to EQ.

Several years ago, I was helping a hospital design and implement a coordinated spine care program. We chose a relatively young, motivated, and talented spine surgeon to be the director of the program. He’d served on some committees but never served in a leadership role as structured as this one. After some preliminary meetings, he pulled the team together. It was a diverse team including nursing, physical therapy, physical medicine and primary care physicians, a psychiatrist, someone from finance, and someone from marketing.

The first meeting laid out the vision and started to build a consensus around a coordinated treatment model. The surgeon ran the meeting. He shared his vision. He explained what he expected of everyone. He showed them the work plan he’d developed.

After thirty minutes, he thanked everyone and wrapped up the meeting. There was polite small talk as everyone filed out. Here’s the conversation that took place afterward:

Surgeon: (rather pleased with himself) "That went well!"
Me: “I’m not sure everyone’s on board. We may have work to do.”
Surgeon: “What do you mean? We accomplished our goals and everyone’s on board.”
Me:  “Here’s what I know, based on my previous discussions with some of these people and reading the room:

Surgeon: “Well, why didn’t anyone speak up?”

Me: “Because of the common politics of a hospital. These are the ongoing concerns of people in these roles and raising them does not always end well for the person raising these issues. It’s often easier to just go along and hope for the best. And you, while well intentioned and pleasant, can be a bit overwhelming and intimidating.”

The surgeon was terribly short on EQ. He had a pleasant demeanor. He had good intentions. He wasn’t abrasive or difficult, but he was almost incapable of naturally understanding the issues, concerns, and motivations of the people on the team - he didn’t think about them proactively or read them once he was in the room. Fortunately, he asked for help.

Nothing I could do would make him score higher in the future on a test of his level of EQ, but his awareness allowed us to prepare strategies to be effective:

We then talked about the fact that he is, by title and role, seen as an authority figure. These individuals have been in dozens of meetings where someone in that role told them what they wanted to be done. By simply and sincerely asking for input, each member of the team would feel valued.

Physicians are smart. If they understand that these communication strategies make the team more effective, they can help accomplish his or her goals. Even if they don’t do it because it’s a “nice thing to do," they might do it because it helps them to achieve their goals.

This surgeon adopted a short check list he’d use when running a meeting and it worked great. As a physician leader, does he have a higher level of emotional intelligence, today?  No. But he’s learned some skills that make him a more effective leader.