Effective Safety Leaders Consider their Team's Dynamics with Their Own 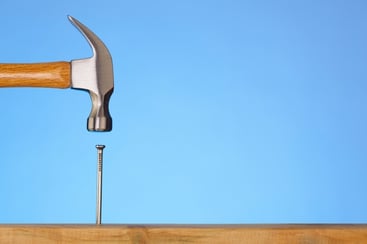 There is nothing like a good expression that explains a situation quickly and concisely, and the world of safety is no exception. After training and coaching hundreds of leaders across various industries and countries, the expression that I often think of is: “if all you have is a hammer, everything looks like a nail.” Some attribute this saying to Abraham Maslow, others to Mark Twain. While neither is certain, we do know what it means: if a person only knows one approach or only has one way of solving problems, they will always use that approach, regardless of the situation.

Recently, I was coaching one of these leaders who was responsible for a large production unit at a manufacturing company. Let’s refer to this leader as “Gary.” Gary’s area was experiencing an increased level of injuries and safety violations. As I went over his personal SafetyDNA® results with him, we discussed how he scored high on the “Rules” factor, which makes him a natural rule follower. Rules just make sense to Gary, whether at work, on the road, or in the grocery store line. While these aspects of his personality were certainly beneficial to leading safety effectively, his leadership profile indicated he was a very hands-off type of leader: Gary trusts his people, gives them autonomy, and strongly avoids micromanaging. This is a well-known leadership style which we refer to as an “Overseer.”

So what do you get when you have a safety leader who is all about following the rules, and assumes his team will do the right thing?

You get…Gary! You get a leader who tells his team to follow the safety rules and then assumes they are doing that all the time. Gary provided several examples of how frequently he reminds his team of company safety policies and procedures during morning meetings, during safe work observations, and in various forms of signage throughout the facility. “So, how could they NOT know the rules? Why on earth would they not use proper PPE or take a shortcut when they know that’s a violation?” he asked emphatically. I could almost visualize him throwing his hands up in the air, exasperated that he lacked the answer to why some of his employees continued to put themselves at risk despite knowing better.

Then came the “a-ha” moment for Gary

When I explained that just because he was rule-bound and rules just made sense to him, it did not mean that his team members were all hard-wired to think this way. We talked about SafetyDNA and how everyone has a unique combination of safety traits that makes them “who they are” when it comes to safety; how we see safety rules is one of those traits. However, it’s hard to tell what an employee’s profile is from just being around them. That’s why SafetyDNA is about internal safety – the psychological side we cannot observe directly or easily. By understanding his bias in assuming his rule-following inclinations were the same as the ones of his team, Gary could now take an important first step in his safety leader improvement journey: understanding that he had to adjust his leadership approach based on his workers’ diverse safety traits.

The next part of the “a-ha” moment came in perfect sequence, as Gary realized that his leadership style was reinforcing the cycle of injuries on his team. He was simply telling his team the rules and reminding them of policies, but that’s where he stopped. There was no explaining why, no guidance, and no real follow-up: “Those things are just not my strength.” For example, some of his team members had reactions and questions regarding a new machine guarding, but he felt that announcing those new requirements quickly in a 5-minute tailgate meeting was enough, so he ignored requests to talk further about the matter. So, when I asked how often he was out on the floor, he admitted that it was not as often as he would like and that he only interacted with employees “if something comes up and I need to talk to them.”

When all was said and done, it was clear that all Gary had was a hammer – telling and reminding his workers of the company’s safety policies. Every employee, every violated policy, every employee question or opposition looked like the same type of nail he had always been hammering. Thus, it was no surprise his department was having safety issues, especially since he was responsible for supervising over 20 employees.

So what can a leader like Gary do in this type of situation?

These are some simple steps to help supervisors and managers become more effective safety leaders. Too many leaders fail to realize the key role that personality and interpersonal dynamics play when it comes to safety. As psychological research has now shown us which traits impact safe behavior along with how leadership styles impact behavior, it’s important to take a closer look at these aspects of your workplace. Knowing your and your team’s safety profiles can lead to powerful behavioral change which, in turn, improves safety culture and reduces exposure to workplace injury.

As Gary realized, not every situation calls for a hammer. If you look closely enough and understand where you and the employee are both coming from, you may just realize that the nail is actually a screw and that you should instead be reaching for a screwdriver.