“A nurse witnessed the onset of complications in an intensive care patient but refused to contact the on-call physician for fear of his temper -- a delay at least one observer thought contributed to the patient's death.”

An ACPE survey of 13,000 physician and nurse executives revealed that disruptive behaviors 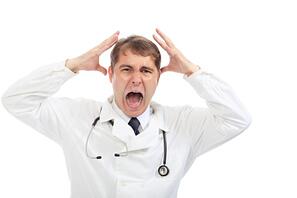 are rampant. Ninety-seven percent of respondents experienced unprofessional outbursts and overreactions, with most saying these happened several times a year and sometimes even weekly. The above quote was just one of the anonymous responses collected.

And it’s not just the egregious behaviors that have an impact. Less obvious behaviors such as ignoring another staff member or silently trying to undermine someone's authority can poison your culture.

The survey found that many behaviors were pretty common: Degrading comments and insults, yelling, cursing, inappropriate jokes, and refusing to work with or speak to colleagues. Less common but still troubling: Throwing objects, spreading malicious rumors and trying to get someone unjustly disciplined or even fired.

What we often fail to realize, is that “this behavior can interfere with patient care” said Alan H. Rosenstein, MD, a lead researcher on disruptive behavior. For all of the focus in patient safety on changing technological systems to make errors less likely, "more work needs to be done on the human factor side," Dr. Rosentein said. "Addressing culture, relationships and communication is more difficult to do."

Results of a 2006 survey published in the July Journal of the American College of Surgeons link these behaviors to adverse outcomes and medical errors.

We usually talk about culture change because we want to create a more patient-centered environment, improve patient satisfaction scores, and improve employee retention. These surveys point out that culture has a real and significant impact on patient care and safety. Dr. Rosenstein was right in stating that changing culture is hard – but it is imperative and it needs to be a multi-pronged approach: