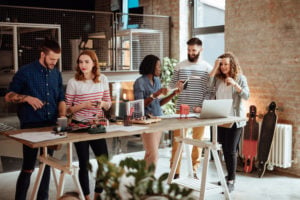 For the past decade or so, Millennials have been the generation everyone is talking about. Articles typically portray the common Millennial as a youthful, entitled, sourdough consuming, technology obsessed, Instagram peddling podcaster-type, only concerned by what faddish bandwagon that they can jump on next. In most cases, the media tend to conflate the eternal frustrations with young people, the iconography of the hipster and a range of misplaced stereotypes garnered from the internet to create a slightly skewed view of a generation.

The reality of Millennials is obviously not aligned with this misrepresentative view (other than their love of sourdough, as it is frankly delicious). In particular, the concept of the Millennial as these youthful, inexperienced, ingenues taking their first Bambi-like steps into the world of work is probably the most factually incorrect. According to the Pew Research Centre, in 2016 Millennials became the largest generation in the labor workforce in the US. Therefore, the Millennial is a very established generation in the workplace and are now the core engine for the success of most businesses and organizations.

In the world of recruitment and talent identification, Millennials have been typically discussed in the context of what is termed the "candidate experience," which is defined as the collective result of engagements, assessments, and interactions that organizations have with candidates during the hiring process. It has become one of the highest priorities for recruiters and there is a real desire to provide a candidate experience that promotes the organisational brand, assesses the individual effectively and provides a positive experience. The importance of addressing this issue is exemplified by Virgin Media, who estimated that they lost £4.4 million in 2014 due to poor candidate experience within their assessment processes.

Historically, research into the candidate experience has been inextricably tied to Millennials as they have been the incumbent generation for over a decade. However, a new generation is now entering the workforce, a generation that has yet to be focused upon by the media with the same level of revelry, termed “Gen Z” (born between 1996-2010). Several recent popular press articles have proposed significant differences between Millennials and Gen Z, but due to the recency of interest in this new generation, there has been little formal research conducted in the area.

Therefore, we wanted to research the area and understand what these potential differences are more fully. Specifically, as business psychologists and designers of assessments we wanted to understand what these differences were specifically from the perspective of the candidate experience. For this research we surveyed and interviewed 283 candidates, asking them a series of questions regarding their perceptions of the assessment procedures used in selection.

The purpose of this research was to help explore some of the differences between the generations and help inform test design for these specific groups. In many instances the generations seemed to have similar perspectives. However, there were certain questions where the responses provided by the two generations were significantly different. Our research suggested the following statistically significant differences between the samples:

In addition to looking at the differences between the two generations, the research also provided insights that may inform the direction of new assessment development. For example, the length of time participants indicated they would consider acceptable to complete a test ranged between 30 to 50 minutes, which is longer than some test designers and recruiters have assumed. Recent developments in selection methods have focused on reducing this time with candidate experience in mind, but the current research indicates that accurate and effective measurement is more important.

We found many of these results fascinating and it demonstrates that it is important for recruiters and organizations to reflect the preferences of the next generation when designing their recruitment processes. Specifically, when trying to hire new talent, appealing to Millennials should no longer be the focus, as it is now time that they move over, as Gen Z have arrived.

Ali Shalfrooshan is the Head of International Assessment R&D, at PSI Talent Management. Ali is an experienced business psychologist with a passion for using psychology, technology and psychometric test design to help organisations and individuals thrive. He has a particular interest in designing innovative solutions, which combine technology and scientific rigour to help deliver a measurable business impact.