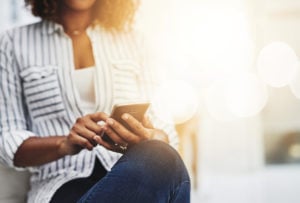 In today’s world, smartphones are one of the most powerful tools we possess, and are used for far more than just communication. In 2017, 63% of all internet based traffic in the US originated from mobiles. It seems likely that it will reach a full two-thirds of all traffic by the end of 2018. Ninety percent of Fortune 500 companies are not even equipped with mobile optimized career sites, according to a recent “Corporate Mobile Readiness” report. A report by Ofcom highlights that consumers report the smartphone is now the most important device for connecting to the internet.

Despite the proliferation of smartphones, this emphasis on users accessing tests via smartphones is not always reflected in the online tools that organizations implement. A study by Kelton consultancy reports that only 2.8% of submitted applications come from a mobile-friendly website. Consequently, a large trend in recruitment is for the website and tests in the initial phase of recruitment to follow a mobile-first design.

As the name suggests, mobile-first design is the process of designing a website or piece of software for mobiles or small-screened devices first, then working up to large-screened devices. This isn’t a new phenomenon and has been around for a few years but now that they are the primary device used for browsing the web, this has specifically impacted recruitment.

How is it being used?

The requirement for a mobile-first design could be applied to every interaction a candidate makes with a prospective employer. The area that probably would need the most practical impact is how mobile-friendly the career site is. However, the main area of focus of this trend is in how it has shaped and influenced the world of online testing. Simply making a test compatible with mobiles is not enough: the format, what it is measuring, and the usability needed to be readjusted and rebuilt to ensure the candidate experience is optimal.

Ali Shalfrooshan is the Head of International Assessment R&D, at PSI Talent Management. Ali is an experienced business psychologist with a passion for using psychology, technology and psychometric test design to help organisations and individuals thrive. He has a particular interest in designing innovative solutions, which combine technology and scientific rigour to help deliver a measurable business impact.