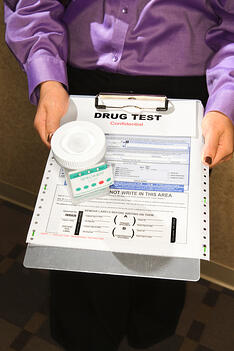 Workplace drug testing is a hot topic of discussion in employment and legal issues.  Despite the concerns about employee privacy raised by various worker and civil rights groups, workplace drug testing has increased by 277% since 1987.  The U.S. Department of Labor (DOL) estimates that drug and alcohol abuse costs employers approximately $87 billion annually in lost time, accidents, health care, and workers compensation.  To further put this into perspective, nearly 65% of all workplace accidents are drug and alcohol-related, and 40% of on-site injuries are caused by substance users. Organizations may require drug tests under a variety of circumstances, including: From the organization’s perspective, drug testing serves one simple, yet impactful purpose: to minimize employees’ risk exposure and reduce the frequency of safety incidents.  This is particularly salient for safety-sensitive positions, which the U.S. Department of Transportation (DOT) defines as a job where the employee holding the position has the responsibility for his/her own safety or other people’s safety.  Thus, an employee must be with clear mind and diligent while occupying such positions.  Drug and alcohol use, whether on or off the clock, can influence employees’ SafetyDNA, such as reduced awareness of one’s surroundings, decreased caution exhibited while performing job tasks, and failure to follow the organization’s rules and state/Federal regulations.  While any employee’s exposure to injury is significantly increased when they are under the influence of drugs or alcohol, those employees whose SafetyDNA is already lower than average on one of these factors are at even greater risk.According to the DOL, alcohol and drug abuse creates significant safety and health hazards, can result in decreased productivity and poor employee morale, and can lead to additional health care costs to the organization, particularly in the form of short-term disability claims.  Therefore, common reasons employers implement drug testing programs are to:

The benefits of drug testing to the organization are clear.  For example, upon implementing an extensive drug testing program, the Georgia Power Company’s accident rates at its nuclear plant declined each year from 1981 (5.41% per 200,000 man hours worked) to 1985 (0.49%), and has remained low since.  Furthermore, employee drug and alcohol use while on the job can result in catastrophic outcomes.  Famously, in 1989 the oil tanker Exxon Valdez struck a reef in Alaska and spilled as much as 750,000 barrels of crude oil into the ocean and surrounding environment.  Among the reported causes of this disaster was that the ship’s captain, Joseph Hazelwood, had been heavily drinking over the prior few days, and at the time of the crash was below deck sleeping instead of at his controls.  Although one of the ship’s senior officers was in command at the time, the appropriate measures were not taken to guide the ship safely along course, including not turning on the radar that would have alerted them of the present danger.  This incident remains one of the largest human-caused environmental disasters in history, and the costs associated with lost oil, clean-up, and damaged public image were astronomic. Although organizations cannot monitor employee behavior off the job, it is reasonable to expect that employees perform their work unimpaired, especially those who work in safety-sensitive positions.  Employers have the duty to minimize employee exposure to risk.  Thus, taking the necessary measures to avoid drug or alcohol use on the job will help reduce accident and injury rates. Next week, I will speak to the legal side of this issue, and the guidelines organizations must follow to ensure employee rights are maintained.