Blind Spots: 4 Psychological Factors That Can Get You Injured

Everyone has a blind spot when it comes to being safe.  No, we’re not talking about just the little area of space in your car where it’s hard to see if someone is about to hit you on the highway, or the area behind your head.  Blind spots can pop up in lots of areas, not just our vision.  Whenever we are not aware of something – whether it’s in our physical surroundings, how we behave, or our personal attitudes – we lack insight about this.  And when we lack insight in something that can get us hurt, it can be a blind spot for our safety.

Think about how you typically drive.  We all have moments when we go a little (or a lot) over the speed limit, or when we speed up at yellow lights.  We know that we are not supposed to do this but we often do it anyway, even though we know it can get us or someone else hurt.  So why do we do it?  In some cases, we don’t even realize we’re doing it.  In other cases, we realize it, but perhaps believe that there is very little chance that we’ll get into an accident or get pulled over by a police officer.  Or worse, we may not even see these behaviors as dangerous or risky at all.  Whatever the reason may be, these can all be potential blind spots that put us in harm’s way.  And the more blind spots we surround ourselves with each day, the greater chance we have of injuring ourselves or others around us.

Driving is just one common example that most people can relate to, but there are many other types of situations or activities where our blind spots can emerge.  For many people, the workplace is where their blind spots can multiply very quickly, putting them at much greater risk.  Whether it’s someone in a factory, a warehouse, driving a vehicle, or even in an office setting, blind spots can come in many different forms.

First, consider a senior manager who oversees all operations for a mining company.  He spends most of his time in the office or in meetings but essentially, the company safety policy is largely dictated by him.  One of the company’s mine sites has reported two recordable injuries in the past month.  The reports seem to indicate that both of these injuries were due to very rare and unpredictable circumstances.  As he always says, “Some accidents just can’t be prevented…” and so he believes there is little he or the team could have done to prevent these injuries.  As a result, no further action is taken to investigate the cause of the two injuries.  Three months later, an employee is almost killed and is permanently paralyzed in a very similar incident.

Second, let’s picture a mechanic who does daily maintenance on various pumps and machines in a large area of an oil refinery.  A highly experienced individual with plenty of experience in this type of work, he has always found work despite his tendency to lose focus and be forgetful at times.  On a particularly busy day, he is feverishly trying to repair two different pumps when he gets an urgent call from a supervisor about a potential chemical spill on the level below.  Distracted, he follows the wrong lock-out tag-out procedure for a valve on one of the pumps.  Shortly after, another mechanic assigned to complete the repair assumes that all valves are fully disabled.  As he begins to repair that valve, he is heavily sprayed with a blast of highly caustic acid at over 300 degrees Fahrenheit, resulting in multiple second degree burns to his face.

Third, we might have an employee at a warehouse that has recently started on the job.  She has come from a previous job where she was fired for multiple policy violations, which she insisted were very minor.  In fact, she was only trying to do her job but she insisted that “the rules” prevented her from being more productive.  Today, she needs to get a package down from a shelf that is only a few feet above her head.  Company safety policy requires her to use a ladder when retrieving something at this height, but there is not one available, and it would probably take more than 10 minutes to retrieve one, which seems like a long time to waste.  Since no one is watching, she climbs up on the lowest level shelf to reach the package.  While pulling it down, she slips and falls.  She strains her back and fractures a bone, resulting in over four months of lost time and workers’ compensation claims.

As a fourth and final example, there is a truck driver who is under a tight deadline to make a delivery to a major customer.  He knows that this delivery must be on time, and he also knows that traffic is building up on the highway due to the time of day.  With this particular customer, if the delivery is not on time, he could lose his job.  Being rather impulsive by nature, he makes a last-minute decision to change his route and takes the closest exit ramp.  In his haste, he fails to realize that the ramp has a steep incline, and he is unable to slow down quickly enough.  He crashes into a vehicle in front of him at the bottom of the exit ramp.  The driver and passenger in the vehicle are both severely injured.

In each of these cases, we’ve seen an example of a blind spot that has put an employee and/or their co-workers at greater risk of injury; either because they were not aware of something in their environment or because of how they viewed risk, or simply because of their attitudes toward safety in general.  Something in their personality, abilities, or beliefs blinded them to the level of risk that they were exposing themselves to.  Everyone has different levels of these characteristics which all impact exposure, so we can actually think of them as people’s “SafetyDNATM.”  And because everyone has their own personal mix of SafetyDNA it means every person also has unique blind spots which can get them injured. 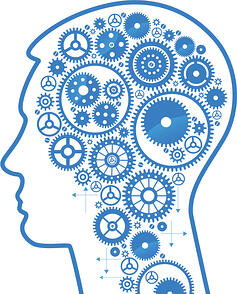 Now, using the four previous examples, the 4 key factors that compose our SafetyDNA and lead to safety blind spots can be summarized as follows:

Stays in Control.  In the first example, the senior manager in charge of safety policy at the mine had the basic view in life that some things are simply outside of one’s control.  And this included safety.  He probably viewed the previous injuries as simply due to “bad luck” or rare, unavoidable incidents.  Therefore, why take precautions against future incidents?  Some people simply attribute events to luck rather than their own actions, so they don’t think they have control over things such as safety.  Stays in Control is our first factor.

Aware of Surroundings.  In our second example, the mechanic working in the oil refinery had great skills and experience, but didn’t necessarily possess the best memory or attention level.  When things got busy, as they often do, he simply forgot a small - but essential - detail at the wrong place and at the wrong time.  Unfortunately, his co-worker paid the price for his being low on Awareness of Surroundings, which is our second factor.

Follows Rules.  In the third example, our new warehouse employee displayed a basic disregard for existing safety rules.  She believed that the rules did not really apply to her, and that it was more important to do the job quickly than safely.  Her behavior is linked to our third factor – Follows Rules.

Exhibits Caution.  In the first example, the driver was impulsive, lacked patience, and took an unnecessary risk.  In other words, he did not Exhibit Caution.  This is the fourth and final risk factor.

These factors together – Stays in Control, Aware of Surroundings, Follows Rules, and Exhibits Caution make up the Select International 4-Factor S.A.F.E.TM Model.  Based on decades of research on accidents and injuries, these four factors are critical to safety and at least one of them is usually involved when a person places themselves at risk of injury.  However, most people are not aware that they might have a blind spot when it comes to one or more of these factors, and without insight into them, even the best safety training program can still leave people exposed to injury.

By assessing for these factors and then providing valuable insight into their personal blind spots, employees in any working environment can significantly decrease their level of exposure over time, and take steps to further improve in these areas in order to engage in safer behaviors and foster a safer work environment.