Your Best Sales Person Could be Your Worst Sales Manager

Joe was an amazing sales person. He was easily one of the best you could have the good fortune of learning from. He was smart, hard-working, a quick-study, creative and could think outside of the box and reframe a situation in such a way that most people had a hard time saying “No” to him.

Joe was always outselling the rest of the sales team. His product knowledge was impeccable. If you had a question about any product, you knew Joe would have an answer. Joe had also been through many different sales training programs, and from a sales perspective, you really would be hard-pressed to find something new about sales that he did not already know. Tough negotiation situation – leave it to Joe. Hard customer with lots of objections – that was one of his favorites!

Joe was promoted to Sales Manager. A gregarious guy, the company felt confident that with Joe’s impeccable skills and sales career, he would be a great manager and help others to achieve the same success he had. They did not interview him; they just assumed that this would be a good move for him and for the company.

Joe was fine for the first few months while he tried to learn the ropes and expectations in his new role. He had several seasoned sales people on his team, so he did not need to focus heavily on their needs. Over time, however, things began to unravel. Joe started with a seasoned sales team; however, he monitored their every move, and always had the “right” answer. There was no discussion about alternatives, no openness to the opinions and ideas of others. Joe was always right, which was part of what made him successful as a sales person.

Joe was also quick to blame others for mistakes, and first to take credit for his team’s new ideas. You could not tell him otherwise since, after all, he was smart and knew more than everyone he managed. He led with an iron fist, and made it crystal clear that you could not challenge his authority – he was “the boss” and what he said you were expected to follow.

Many of the things that made him exceptionally good at what he did in sales actually led to his failure as a manager. Joe ended up leaving the company – a once revered salesperson, now with a tarnished reputation as a poor leader. It was a loss for Joe, and the company lost one of the best salespeople they ever had. If they had simply taken the time to look a little more deeply and determine if Joe would have the skills needed to lead effectively, they may still have a great salesperson on the team.

If the story of Joe is one you have experienced, consider looking at three different pieces of data before making your important leadership decisions:

1. Performance. Before considering someone, determine what level of technical knowledge is truly needed and what the “performance” threshold must be (e.g. all meets and/or exceeds performance criteria). Some of the best leaders are those who are lifelong learners, and are not afraid to admit they do not know it all.

2. Potential. Add an in-depth assessment to the process! This will help you to uncover the knowledge, skills and abilities that the person may not yet have had the opportunity to exhibit on the job, and help you better ascertain any issues that might lead to less than adequate job performance as they move up through the organization.

3. Perception. Gather 360-degree data about the person. Understanding how the person is perceived by others can help to determine what behaviors they exhibit and the effect of those behaviors at work.

These suggestions will help increase your odds of keeping, promoting and developing the right people!

For more information about hiring for sales positions, download our

Whitepaper on Predicting Success in Sales. 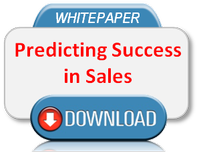 Carolyn Cosco is a Strategic Account Manager at PSI. Carolyn has over 20 years of experience in both sales and consulting, working across industries and levels both domestically and internationally. Carolyn’s superpower is helping people and organizations achieve their greatest potential through their human capital.