In reviewing the hierarchy of controls discussed in our previous blog, we discussed that the top levels within the hierarchy of control require less involvement of people while the bottom of the list needs considerably more involvement of people. For example, we know that the use of PPE requires that the employee first recognize the need to use the PPE, then they are able to properly select the proper type of PPE, and then finally they must be able to properly wear it in the correct manner in order for it to provide the protection that is required. For this reason, we often refer to the top levels within the hierarchy to be inherently safer and therefore will provide more protection than those at the lower levels in the list. 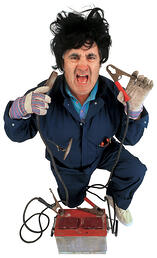 Inherent is an interesting term. One dictionary defines the term inherent as something that is “involved in the constitution or essential character of something: belonging by nature or habit.” Another dictionary defines inherent as, “existing in someone or something as a permanent and inseparable element, quality, or attribute.” Words that were listed as being synonymous with inherent included “built in”, “integral”, and “intrinsic.” So clearly when you eliminate or substitute something, the situation would be inherently safer since these levels of controls build in safety as part of the process.

But does this concept also relate to people? Are some people more inherently safer than others? Do some have a “nature or habit,” or more “inseparable element, quality, or attribute” to follow the rules, take less risk, pay closer attention, and remain more in control than others? Is safety more “built in” to some more than others? If you ask most safety professionals about people’s behavior they will often cite anecdotal stories that some people just approach safety in a way that is different than others. Even most non-safety professionals can identify someone they know who is “accident-prone.” These people just seem to be involved in more incidents that others. How do we know this? Because these people were involved in accidents.

What if there was a way to identify these people who are accident-prone before they are involved in accidents? After all, the bottom line is that sometimes we may never get the chance to identify someone who was “accident prone” because they may only in involved in one accident – the serious one that permanently disables or kills them. So we can’t rely on trial and error to allow us to identify these employees. The trial and error cycle might be too late. If, instead, we were able to identify the intrinsic traits of people related to safety behavior, their “safety DNA,” so to speak, we could then be in a place to better eliminate, reduce, or control the risks related to unsafe behavior.

Think about it – although human behavior is only one piece of the puzzle of incident causation, it’s a pretty common piece. Human behavior, and specifically human error, is directly related to the risk of a situation because human error creates an avenue for exposure to a hazard, therefore increasing the probability of an incident. If we could identify those employees most likely to make errors and substitute those employees with other employees who are less likely to make errors we are, in effect, reducing the risk by reducing the frequency of an event. This isn’t to say that the employee(s) are the problem, but rather are part of the overall safety system that must be analyzed and controlled to decrease risk, just like any other part of the system. The bottom line is that if information related to risks to employees is readily available, wouldn’t it be unethical to not take advantage of such information?