Safety Assessment: How to Tell if Employees Really Exhibit Caution 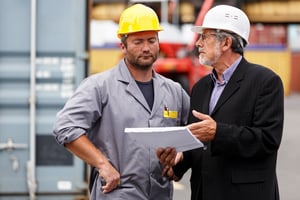 This is the final section in our series of the SafetyDNA® S.A.F.E. model, Exhibits Caution.  To help illustrate this factor, let me share a simple but telling story about my two young sons.  One day, my wife and I were walking with them on a dirt road after a heavy rain, which had resulted in large puddles everywhere.  My oldest son, who was five at the time, asked how deep the puddles were and what would happen if he stepped into one.  Given some of the large potholes that formed these puddles, I responded, “It’s best to stay away from the puddles, you never know how deep they are.”  As we walked along the road, it was interesting to see how he very carefully and painstakingly worked to avoid each puddle, sidestepping the small bodies of water as if they held deadly landmines.  Then, out of the corner of my eye, I saw my 3-year-old take great delight as he devilishly ran for a head start, planted his feet and propelled himself as far as he could into the largest puddle in the road, creating quite a giant splash as he laughed out loud and got mud all over his newly washed pants (much to my wife’s chagrin).

To this day, I have images of that moment in my mind because it ended up capturing their future personality differences so clearly.  For example, my older son ended up having a strong fear of stairs for about two years and would need to sometimes be carried up or down flights of stairs because he was so afraid of falling, while his younger brother would simply jump down two or three stairs at a time (and still does).  And the same applies in many other areas of their life – the oldest dreaded taking the training wheels off his bike and asks to hold the GPS so he can tell me if I am exceeding the speed limit by 2 MPH while the younger just tells me to go faster all the time.

I share these stories to make the simple point that everyone is different when it comes to caution, and to a large extent, it’s something we are born with.  The Exhibits Caution factor is based on years of research on risky behavior, impulsivity, and general comfort level with risk.  The research shows not only that you can measure these things, but that people who exhibit more Caution are much less likely to be involved in safety incidents and get injured on the job.  Does that mean that someone who engages in risky or impulsive behavior is a bad person or an unsafe employee?  Not at all.  Heck, people who take risks are often creative and think outside the box.  Many end up being some of the most successful entrepreneurs because they take risks and go with their instinct.  And let’s face it – they are often just really fun to be around!  However, when you are working in an environment where there are hazards and you can easily get hurt on the job, risk-taking and impulsive behavior are not a good combination, and they often get people hurt or even killed.  That’s why it’s always best to Exhibit Caution in the workplace and leave the risk-taking and impulse for another time – say, a card game or a round of lottery tickets.